I was on The Ingraham Angle on Fox News to talk about the Kavanaugh accusers:

INGRAHAM: Joining me now on set is Gayle Trotter, the spokesperson for the Judicial Crisis Network, and Sonia Ossorio, president of the National Organization of Women, New York City chapter. It’s great to have you both on tonight. I want to start with you, Sonia. We’ve seen these late in the game drive- by hits on Kavanaugh’s character and reputation, so is it not fair to inquire, as Politico did and other news organizations are tonight, about the character and reputation of the accusers?

SONIA OSSORIO, NATIONAL ORGANIZATION FOR WOMEN: The accusers aren’t up for a lifetime position on the Supreme Court. We can talk about this all day long amongst us and on every television station, but what we need are experts. We need an investigation. There are so many people that are involved in these circles. That’s the only way we’re really going to get to the truth. And in terms of what you talked about that there’s no corroboration, there absolutely is.

INGRAHAM: Really? What’s the corroboration? Let start with the most recent, there some anonymous stuff we’ll get to which is laughable. But what I just want to be clarified so everybody can understand, so what you’re saying is a woman can make any allegation against a man late in the process like this, with no contemporaneous corroboration, and not be subjected herself to scrutiny for motives or character.

INGRAHAM: My question is a serious one. You’re saying a drive-by hit late in the process, after the confirmation is over, after these allegations have been sat upon, you cannot question him?

OSSORIO: You’re calling it a drive-by hit, so I think that’s already happening. That their characters are being.

INGRAHAM: But Politico. Is Politico part of the right-wing conspiracy?

OSSORIO: Please. What we need to do is have an investigation.

INGRAHAM: But you’re saying anyone who makes an allegation, no matter what, that allegation has to be investigated by the FBI? Are you kidding me?

OSSORIO: When the person is up for the Supreme Court.

OSSORIO: We are making some progress.

GAYLE TROTTER, JUDICIAL CRISIS NETWORK SPOKESPERSON: I think the truth is that far left partisans led by Chuck Schumer vowed before Judge Kavanaugh’s name was even released that they would stop this confirmation by any means necessary. And we’re seeing that these far left partisans think that the means are justified — the ends are justified by the means and so they’re going to do anything, anything to engage in assassination of Judge Kavanaugh’s character.

Far left partisans led by Chuck Schumer vowed before Judge Kavanaugh’s name was even released that they would stop this confirmation by any means necessary. They think that the ends are justified by the means and so they’re going to do anything to engage in assassination of Judge Kavanaugh’s character.—Gayle Trotter

OSSORIO: Ladies, are you suggesting that the Democratic Party or operatives went out and recruited these women, and they sat around the table and they said, OK, now, you’re going to say this, and you’re going to lie, and I know you’ve got a life, and a job, and kids, but we’re going to blow it all up because.

TROTTER: Debbie Ramirez was speaking with lawyers for six days until she decided she was sure enough that it was Judge Kavanaugh.

INGRAHAM: Let’s read more about this latest accusation, because Michael Avenatti is like the gold standard of credibility. I mean, you can never question — he’s another person you can never question. She filed a sexual harassment complaint against her former employer, this is a New York Times piece tonight, about a decade ago. It was against New York life insurance. OK. Sexual harassment complaint, it’s fine. According to people familiar with the matter, representing her in the complaint was the firm run by, wait for it, Debra Katz, the lawyer currently representing Dr. Ford. Is that just a coincidence?

OSSORIO: Who knows? I mean, if she’s an expert in workplace sexual harassment — you know what I think we should be asking is why doesn’t Mark Judge — why is he subpoenaed?

INGRAHAM: Who cares about Mark Judge. There is no corroboration.

INGRAHAM: . for any of this. Where’s the corroboration? Give me one contemporaneous witness. All for people in the room.

OSSORIO: You know what I believe? What I believe is I need — I would like to know the facts. And the only way to get to a fact.

INGRAHAM: You wouldn’t support him anyway.

OSSORIO: That’s beside the point.

INGRAHAM: You don’t care about the facts. You want him off the court.

INGRAHAM: It’s fifth vote on the court and it’s Roe versus Wade. And the national organization for women, God bless you, it’s about Roe, it’s about identity politics, and this is feminism today, no wonder so few women want to identify themselves as feminists because every man — every man is guilty, they’re guilty as charged, your reputation is down the tube.

INGRAHAM: Really? Because most American women see through these late in the game hit, yes, they do. They’re calling B.S. on this and you know it. Let’s talk about.

OSSORIO: You know there’s three of us right here in this room. There’s four of us. The likelihood that one of us has been sexually assaulted is very much a possibility because those are the statistics.

INGRAHAM: OK. Do you think women?

TROTTER: You are — uncorroborated claims. How much does that affect.

OSSORIO: Well, we don’t know until we have.

INGRAHAM: Sonia, I have a question for you.

OSSORIO: She was talking about this in 2012.

OSSORIO: That’s why we need a real investigation.

INGRAHAM: You know what I want an investigation? I want an investigation of what Brian Fallon, former Hillary Clinton operative, revealed to suckle Kavanaugh. To keep the Supreme Court out of Kavanagh’s hands until 2020, out of Trump’s hand. He said the following, saving the Supreme Court from Trump’s clutches is always involved a very complicated two step. First, block Kavanaugh. Then fight like hell to win back the senate. If Kavanagh drops out, we’re halfway there. If Democrats are able to win the senate back, we’ll have a path of blocking Trump for picking any of the arch conservatives on his short list. This has been a plan from the very beginning. Debra Katz has been a member of the resistance. George Soros’s paws are all over this. They’re not busting people into town to play Tiddlywinks. They’re busting people into town to smear a good man and that’s unfair. And I think it’s a disservice to women.

INGRAHAM: Yes, I do. I’ve known him for 28 years, thank you very much. And he’s a great — he’s not a good man, he’s a great man. He’s not perfect. Sure he had a few beers. I’m sure all of us had some beers in high school or college. But to say someone has done this with zero corroboration is an outrage.

OSSORIO: This is why women do not report that actual assault. This is why so few women report it because this is the treatment.

TROTTER: I’m not buying that.

INGRAHAM: Would you go to a great party — if you know what happened nine times, would you go back to that same party? What kind of person — what kind of woman doesn’t say, I want to protect my sisters out there? I want to protect the young girls in high school who are being lined up, apparently, to be raped. I’m going to go back to the part, have a beer, and then put myself in jeopardy. That is a woman, we should say.

TROTTER: What about her lawyer? Any lawyer has a duty of obligation to their client, and she didn’t go to law enforcement. So if you think.

INGRAHAM: Women have to protect other women.

OSSORIO: Then why are you calling it a drive-by hit?

INGRAHAM: Because it is.

INGRAHAM: Because they had an entire confirmation process where they could have brought up these allegations, and Dianne sat on them because she knew it would be damaging two days before a vote. Sitting on an allegation. I don’t think you would do that.

OSSORIO: Why rush it?

INGRAHAM: All right, guys. We’ll let you have the last word.

OSSORIO: Let’s have an investigation.

INGRAHAM: All right. We agree that sexual assault is really.

INGRAHAM: All right. Thanks, you two. 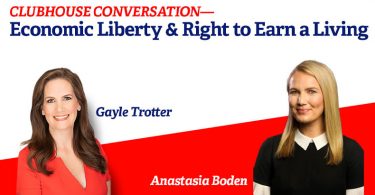 I spoke with Anastasia Boden, an attorney in the Pacific Legal Foundation’s Economic Liberty... 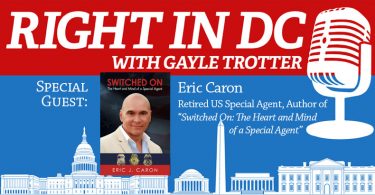 My guest on RIGHT IN DC is Eric Caron, a former US diplomat and retired US Special Agent. He spent...

Gayle peers into the garbage slums of Cairo, Egypt with Ellen Vaughn, co-author of Mama Maggie: The...